Indonesia, is known as a second home of the orchid species after Brazil. Orchid Forest Cikole, is established to introduce all orchid species to Indonesian people and tourists and to protect them. There are more than 20.000 orchids from Indonesia, Philippines, Peru and Brazil.

Indonesia, is known as a second home of the orchid species after Brazil.

Orchid Forest Cikole, is established to introduce all orchid species to Indonesian people and tourists and to protect them. There are more than 20.000 orchids from Indonesia, Philippines, Peru and Brazil.

Orchid Forest Cikole was opened on August 24th, 2018 and become quickly a very popular place in Lembang, which offers to the visitors fresh mountain air, rows of pine trees and of course a wide collection of orchids.

To increase the popularity of Cikole, the management of the forest offers some exciting activities, like trekking, shows and concerts in the amphiteatre and a special lighting system.

The place presents different views during the day and night. During the daylight hours visitors could see all colorfull orchides.

But during the night, the forest is a fairy tale.

The Garden of Lights illuminated with a romantic light decoration controlled by sensors create a admirable light show. 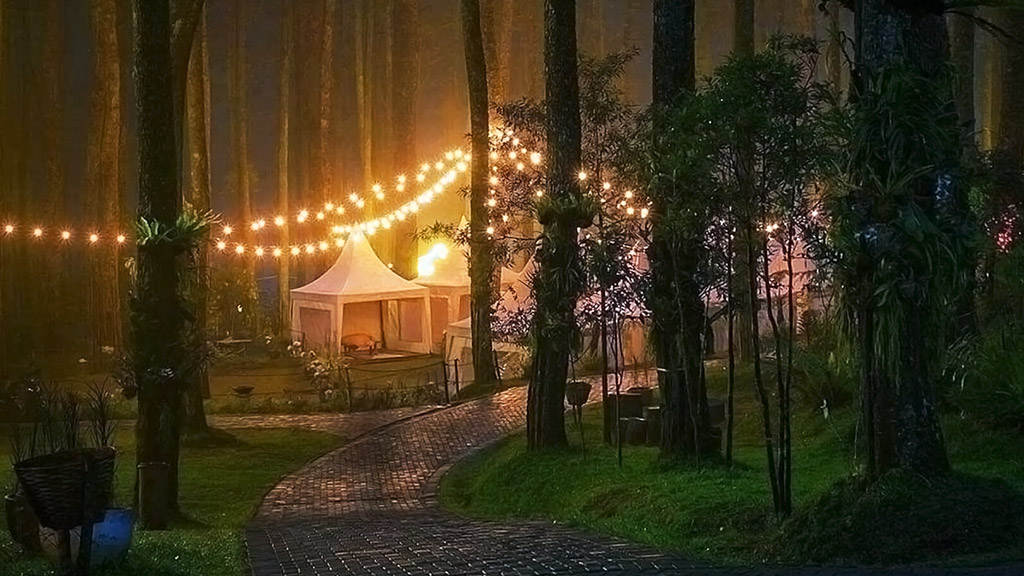 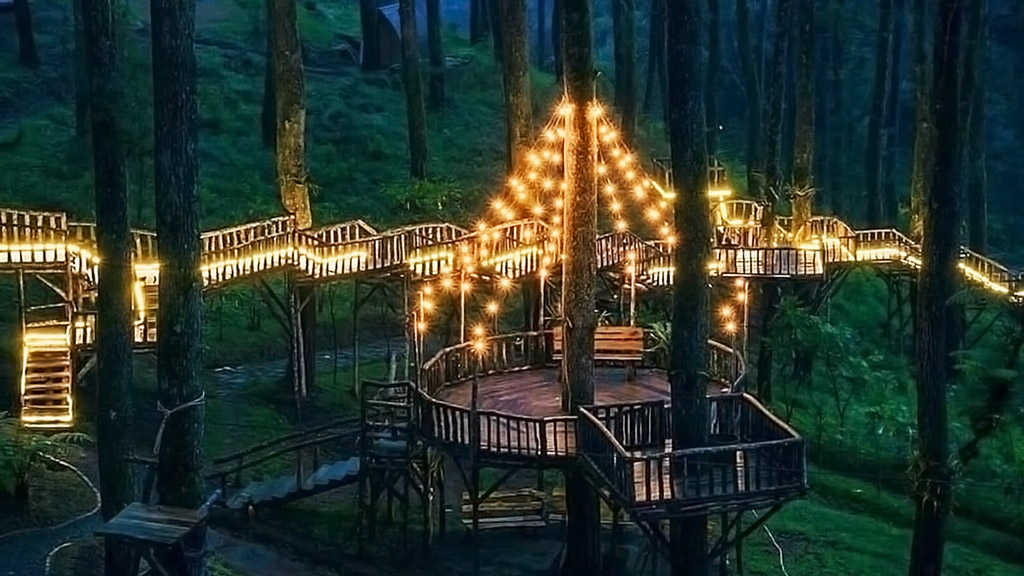 The rustic wooden bridge is one of the favorite places to take pictures, at night after the lights turn on. 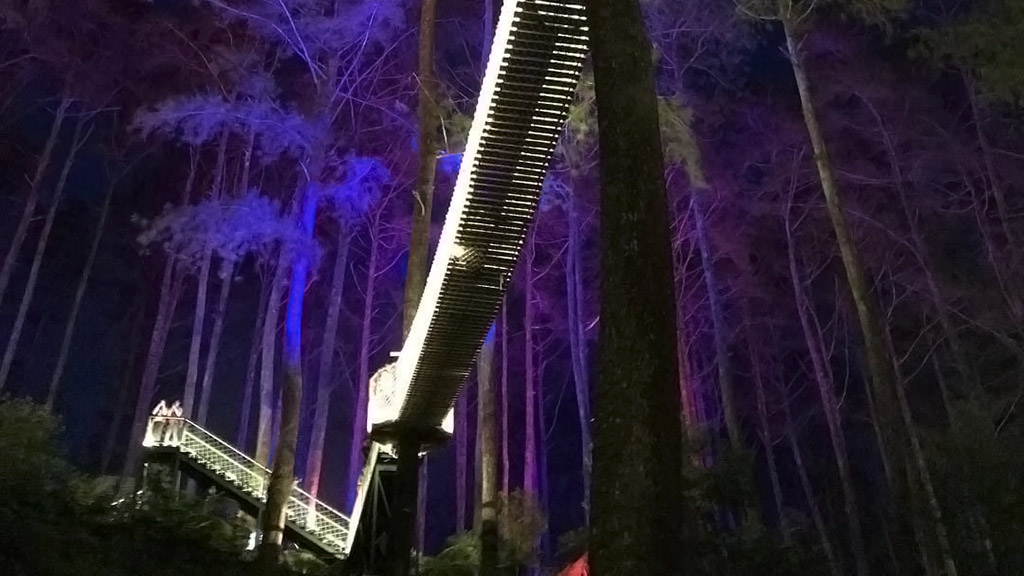 The most fascinating view in the forest is the suspension bridge that floats among the pine trees with its warm light color neon illumination. 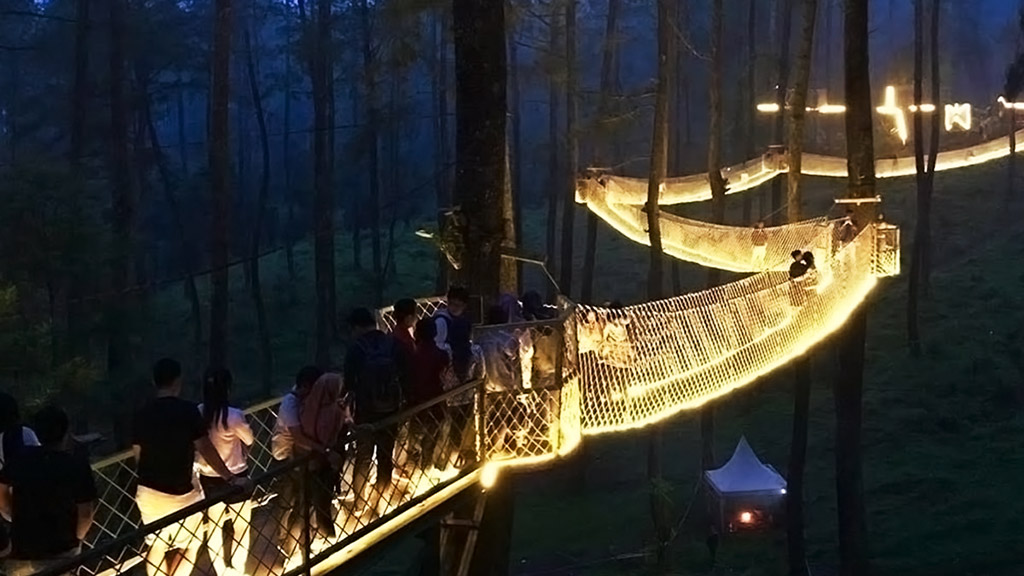 When night falls the bridge twists like a lighted-up snake into the forest.

Since the bridge is placed well above the ground, it looks like a flying road in the dark.

These illumination of Orchid Forest Cikole is a very good example of the impressive power of light.

Very simple wooden structures turn to a dreamy elements with light and the forest to a magical environment.

So sometimes no need too much technology but imagination…

Ayşe Özkiper
After Notre Dame de Sion French High School, Ayşe Dilay Özkiper continued her education at the Istanbul Technical University and has been graduated as an Architect. She also graduated from her MBA at the Istanbul University Institute of Business Economics. She attended various workshops, formations, and schoolings on lighting design and technique. Özkiper spent the last 20 years of her 29-year professional career in the lighting sector with the expertise of architectural lighting and still continues as a lighting designer and consultant.
Related Posts

Old Town of Paphos, Cyprus
Paphos, city of birth of Aphrodite, is one of the most beautiful and oldest town on the west coast of Cyprus. Paphos has been listed as a UNESCO World Heritage Site and also named a European Capital of Culture, in 2017. To deserve these praises, a regeneration project was prepared...
0
177

SOFTSTONE Office Building
SOFTSTONE is a mid-rise office building located in Tehran city center, which is changing rapidly and transforming to a mixture of residential and non-residential urban area. The main idea of the SOFTSTONE‘s façade lighting design is to have a gentle light towards the stone details.
0
210

Panda House
The zoo in Copenhagen is one of the oldest in Europe and has been home to a pair of pandas gifted by China since 2019, following a visit by the queen of Denmark to China in 2014. The area covers around 2,500 m² and has vegetation and spaces where the...
0
171

Holland Casino Venlo: Media Facade as a Global Business Card
Holland Casino Venlo, which was put into service in the province of Limburg in the south of the Netherlands, gained a unique appearance with the LED facade lighting made by Livingprojects. The facade of the building is impressive, iconic, majestic and extraordinary, giving visitors a feeling of Vegas.
0
266
Leave a Comment